Home / Blog / How to Tell If You Have Cockroaches

How to Tell If You Have Cockroaches 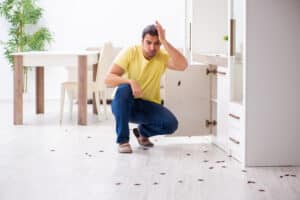 Nobody wants to find insects in their home or apartment, but personal tolerance levels vary from one creepy-crawly pest to the next. Ants, for example, are undesirable but might not freak homeowners out. Cockroaches, on the other hand, are widely regarded as the worst insects to discover at home. They create a visceral disgust response in most people who encounter them.

Not only are people repulsed by the mere thought of cockroaches, but these insects can also actively cause damage. They will nibble on just about anything they come across — and with even a small infestation, this chewing habit can cause major problems. What’s more, they are vectors for many diseases — and they can trigger allergies or even asthma attacks.

The good news? The sooner you spot the telltale signs of cockroaches, the better capable you are of addressing the issue before you have a full-blown infestation on your hands. In this guide, we highlight several signs worth watching for, plus key actions you can take to stop a cockroach infestation.

Signs of a Cockroach Infestation to Look for Around Your Home

If you suspect that you have a problem with these insects in your home, trust your intuition. You’ll want to find clear signs of them to confirm your nagging suspicion, but it’s always best to be proactive about pest control. Keep an eye out for these common signs of cockroaches:

These issues can look a bit different from one roach infestation to the next. They’ll depend on the climate, where the pests are hidden, and the type that’s present. To bring additional clarity to these concerns, we’ll dive into details about cockroach signs below:

Seeing the Actual Insects Around Your Home

It might seem obvious, but the moment you see one cockroach, you can assume others are around. It’s tempting to think that just one or two may not be a big deal — but in all likelihood, more are lurking. Both live and dead cockroach sightings should alert you to the problem.

In some cases, homeowners don’t make the connection between a sighting and a full-on infestation simply because they have no idea what these pests actually look like. In such situations, these insects may be confused with beetles.

The main differences include head size (beetles’ heads are smaller) and leg/antenna length (both are usually longer for cockroaches). Additionally, the accompanying signs of cockroaches discussed later in this guide (such as droppings or musty odors) are less likely to be an issue when beetles are present.

Keep in mind that there are different types of cockroaches. Common species include:

Besides actually seeing the pests, droppings may be the most obvious sign of an infestation. As with the insects themselves, however, it can sometimes be difficult to determine what these droppings are — or to distinguish them from other issues.

Mouse feces look similar but are larger. Some cockroach droppings possess a cylindrical shape, while mouse droppings can more accurately be compared to grains of rice. Both types of droppings will become more prominent as you get closer to the nesting site of the intruder in question.

Your search for a cockroach nest will look little like the effort to locate nests built by mice or other pests. The main difference? Cockroaches don’t gather materials to build nests. Rather, their nests simply represent areas in which several of them gather together.

Typically, you’ll be able to spot a “nest” as you see more and more of them in the same area. They will likely be gathered in a protected space. Nests are often found behind refrigerators or other large appliances. They may also be situated behind furniture or in assorted cracks or crevices.

Nests usually include not only several cockroaches, but also, discarded egg cases. Cockroach eggs vary a bit based on the species but are generally deep red or brown in color. Smooth and shiny, they are rarely larger than 10 mm. If these egg capsules appear to be split, the egg has already hatched. However, eggs that look plump are about to hatch — and when they do, they could produce several cockroaches.

How you proceed when you find a nest will depend on how large it is and how comfortable you are handling the situation on your own. At this point, however, active intervention is essential. If the infestation seems modest, you could potentially eradicate the issue on your own with help from the right product.

These pests rely on the power of scent to communicate with one another. The smells that they emit are detectable to humans, although the source of these odors is often not identified until other signs become obvious.

Typically, homes infested by cockroaches smell musty or mildewy. People with infested homes have also described the ensuing scent as oily. The stronger the odor, the worse the infestation.

These pests chew on a variety of materials. They’re known for infesting homes in which food is easily accessible, so their chew marks may be seen on food packaging. Unfortunately, they are also able to chew and digest many other materials. Newspapers, cardboard boxes, and even curtains can be vulnerable.

Cockroaches in high-moisture areas tend to leave dark smear marks on walls, baseboards and other surfaces. Be prepared to get even more grossed out: these smears consist of liquefied droppings that have developed a loose and greasy consistency due to heat and humidity. As such, these smear marks are more likely to show up during the summer or in hot climates. These might look a bit like rust or food stains, but they’ll likely be accompanied by the musty, unpleasant odor mentioned previously.

Based on the signs above, you’ve determined that you have a cockroach problem in your house. The sooner you take action, the better. This may involve a comprehensive process that encompasses cleaning and the targeted use of deterrent products.

Ready to take the next step in your mission to rid your home of cockroaches? EarthKind offers Stay Away® Ants & Cockroaches which is a deterrent that relies on plant-derived essential oils. This is an excellent alternative to harmful chemicals. It’s easy to use and can easily be implemented in places you are unable to reach on your own. Order online today or contact us to learn more about our products.