Spending time outdoors offers numerous benefits for the mind, body, and community. From reducing stress to increasing focus to improving your attitude toward your neighbors, countless studies have proven the positive effects of time spent in nature. However, there are a few safety tips to remember when you’re going outside, and it is always important to be aware of your surroundings.

Some things might seem clear, like wearing light-colored or reflective clothing at night, and dressing appropriately for the weather, but other things are not so obvious. How many times have you gotten a sunburn because you forgot to plan ahead for a day outside? One often overlooked risk factor associated with the outdoors is common pest and critter control.

Biting insects, for instance, are more than just a nuisance, mosquitoes and ticks can carry dangerous diseases, too. Follow along to find out what types of ticks carry Lyme disease and the different species of ticks you need to know about!

6 Different Types of Ticks in the U.S.

Ticks are blood-sucking critters that can affect both people and animals. They belong to the class Arachnida and are like spiders insofar as they have eight legs. Unlike spiders, all types of ticks engage in parasitic feeding behavior as they require a blood meal to grow and develop. There are over 850 different types of ticks worldwide, with 80 different species known to occur in the United States.

These critters are divided into two families: Ixodidae, the hard ticks, and Argasidae, the soft ticks. The families are differentiated by physical and life-cycle characteristics. For example, all hard ticks have a shield-like scutum on their top side which can be used for identification. Noting the color, shape, and markings will help you identify the different tick species, but all of them feed on blood and can transmit pathogens that cause human and animal diseases.

Each species has unique characteristics and geographic distribution. This means that the types of disease spread by ticks may vary by region. For example, Rocky Mountain Spotted Fever is carried by those that reside in the Rocky Mountain region. However, ticks can travel great distances while attached to a host, so location is just one trait to consider when determining which species you may have encountered.

Knowing which type is most active in a given area or during a certain time of year will help you prevent tick-borne diseases and illnesses. 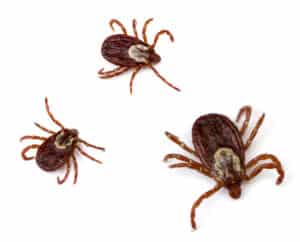 Dermacentor variabilis, or the American Dog tick, can be found in limited areas on the Pacific Coast, and is widely distributed east of the Rocky Mountains. Dog ticks are sometimes called wood ticks, but can be differentiated by the white racing stripe-like markings behind its head.

According to the CDC, the highest risk of being bitten occurs during spring and summer, with adult females being the most likely to bite humans. An American Dog tick bite can spread Tularemia, Rocky Mountain Spotted Fever, and may possibly cause tick paralysis.

Ixodes scapularis, AKA Blacklegged ticks, prefer hanging around protected, wooded habitats. They are widely distributed across the eastern United States, all along the entire East Coast, upper Midwest, and westward to Texas. The western black-legged tick, Ixodes pacificus, can be found throughout coastal CA, the foothills of the Sierra Nevada range, Washington, Oregon, Idaho, Nevada, Utah, and British Columbia. These critters can be identified by the black shield on their backs, their reddish bodies, and the absence of festoons, which are small areas separated by short grooves on the back margin of the tick.

The greatest risk of being bitten exists in the spring, summer, and fall. However, adults may be out searching for a host any time winter temperatures are above freezing. The life-cycle stages of this arthropod that are most likely to bite humans are the nymphs and adult females. Despite being known as ‘deer ticks,’ these pests have been documented feeding on more than 125 different species including deer, dogs, rodents, and birds. They are known to spread Borrelia burgdorferi and B. mayonii (which cause Lyme disease), Anaplasma phagocytophilum (anaplasmosis), B. miyamotoi disease (a form of relapsing fever), Ehrlichia muris eauclairensis (ehrlichiosis), Babesia microti (babesiosis), and Powassan virus (Powassan virus disease). 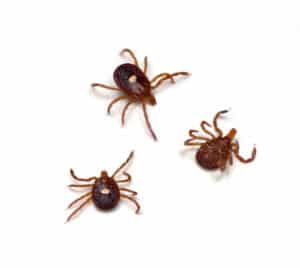 Amblyomma Americanum, or the Lone Star Tick, generally lives in the southern states, up to Iowa, Kansas, Nebraska, and along the Atlantic coast all the way north to Maine. When identifying this species, you may notice that males are basically all black, whereas the female has a ‘lone star’ or white spot on her back. However, while most ticks move rather slowly, this one scurries very quickly, so it might be hard to get a good look if they’re on the move!

The Lone Star type are known vectors of tularemia and human monocytic ehrlichiosis. They may also be a vector of a Lyme disease-like illness in the South.

Rhipicephalus sanguineaus, AKA the Brown Dog Tick, has made itself at home all around the entire world, taking up residence wherever domestic dogs are found. One way to identify this critter is by its short, triangular mouth palps.

Dogs are the primary host for the brown dog tick in each of its life stages, but they may also bite humans or other mammals. These ticks are known to spread Rocky Mountain Spotted Fever. 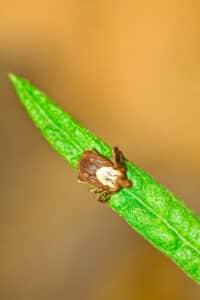 Dermacentor andersoni, or the Rocky Mountain Wood Tick, is often found in the western states, especially in wooded areas more so than in or around human habitat. However, they do often occur in the vicinity of homes, particularly those in suburban America. If you are able to see its mouthparts, you may notice that they are shorter and straighter than their counterparts.

Be wary of these pests as they are known to spread Lyme Disease and Rocky Mountain Spotted Fever, Colorado Tick Fever, and possibly tick paralysis.

Amblyomma maculatum, AKA the Gulf Coast Tick, is found in coastal areas of the United States, along the Atlantic coast and the Gulf of Mexico.

Larvae and nymphs feed on birds and small rodents, while adult ticks feed on deer and other wildlife. Adults have been associated with the transmission of Rickettsia parkeri rickettsiosis, a form of spotted fever, to humans.

Remember these tips to protect yourself and your family from ticks and other biting insects:

Doing a quick body check for these pests when you get home from the outdoors is always a good idea, and don’t forget to inspect any pets that were outdoors with you. If you’re looking for an insect repellent that’s scent-free and safe for children (when used as directed), Stay Away® Mosquitoes is a skin-friendly spray that uses Picaridin. It provides up to 14 hours of protection from ticks and mosquitoes.